[Stephen Wayda’s] influence on photography cannot be overstated.   His evolving styles, his sense of sexuality coupled with the personality of his photographic subjects delivered on the Playboy dream, from the fantasy of decadence and passion in Paris to the charm of the girl next door in the wheat fields of Texas. His photographs have helped Playboy in changing the way the world looks at women, and changed the way women look at the world. In his heart he is a cowboy whose job has brought him into contact with the world’s most beautiful women. With a commitment to visual innovation and an artistic sense of sexuality, his contribution to photography will live on for generations to come.

Stephen Wayda is one of the world’s most celebrated photographers, with an ever-evolving Rolodex of photographs of the who’s-who of the world, from A-list celebrities to pop culture icons, supermodels, musicians, and the “girls next door.” Wayda quickly gained his reputation due to his style: he emphasized the attitude and personality of each subject above all else.

At Playboy — where he photographed the most celebrities, covers, women, and pictorials in the magazine’s history — Wayda gained renown for his use of light and composition to capture the intimacy and openness of his subjects, bringing out moments of deep humanity.

Wayda has photographed on four continents, from the African plains to Tengboche Monastery at the base of Mt Everest, from the islands in the Pacific and the Caribbean to the cosmopolitan cities of Europe, and from the heartland of America to the cities and jungles of Asia.

Through his travels, he has brought to the world stunning, captivating, and thought-provoking photographs. But one of his collections was locked in a safe for nearly two decades. Until now.

Behind these photos lay the real story of when Pamela Anderson met Tommy Lee, a mesmerizing mixture of unbridled passion, sexual indulgence, free-flowing whiskey, and $4,000 of Cristal champagne, among others…

This is Glam Rock’s storybook romance.

These seven one-of-a-kind photographs depict that untold story of when Pam Met Tommy and their whirlwind marriage 96 hours later. There are three categories of pictures:

When Hef first saw these images, he literally locked the full shooting in the Playboy safe for 18 years. The photos betrayed Playboy’s image of Pam as the “Girl Next Door” at a time when she was the DNA of the brand. But there was another side to Pam, and this is that story.

Pam and Tommy briefly met on New Year’s Eve, 1994. Though Tommy’s dogged pursuit turned Pam off, she relented (after six weeks) and gave him her itinerary for a shoot in Cancun.

When he actually showed up uninvited, Pam was equally excited and intimidated, though she’d forgotten what he looked like. When they finally met in the hotel bar, she approached one of Tommy’s friends thinking he was Tommy.

What was supposed to be a quick after-work drink devolved into three nights of revelry of the highest degree. At the end of those three days, knowing what I would find — and with Pam’s total blessing — I photographed Pam in her disheveled penthouse suite, her face aglow with an unmistakable “freshly fucked look.” I didn’t want a sexualized shoot, but I wanted to capture that look, the afterglow of two bodies and souls coming together.

As my crew and I were leaving, Pam changed her plans to stay one more day. Unbeknownst to all, Tommy had proposed to Pam that night. Their plan was to get married later that day.

The morning after I got back home, my home phone seemed permanently set to RING. Everyone wanted pictures of Pam and Tommy’s wedding.

What wedding? I had no pictures of the wedding nor any inkling that there had been one.

Upon their return, we held a small “wedding reception” in the L.A. studio, providing their one and only wedding cake and, of course, Cristal.

Knowing Pam wanted pictures of them in bed, we’d built a small bedroom set in the studio. Pam got naked, but the normally flamboyant Tommy was cowed and kept his pants on. Two of these pictures, which are not part of this collection, were used for the Rolling Stone cover story.

When asked my favorite of the thousands of women I’ve photographed, it’s always Pam. Over the 28 years we worked together, we had often joked that I had seen her naked more than some of her husbands.  Pam was always a joyous adventure, and Pam was always FUN.

Each auctioned NFT comes with a signed & dated museum-quality 20×28-inch photo print, the original 35mm negative, and a certificate of authenticity, shipped in a tube. 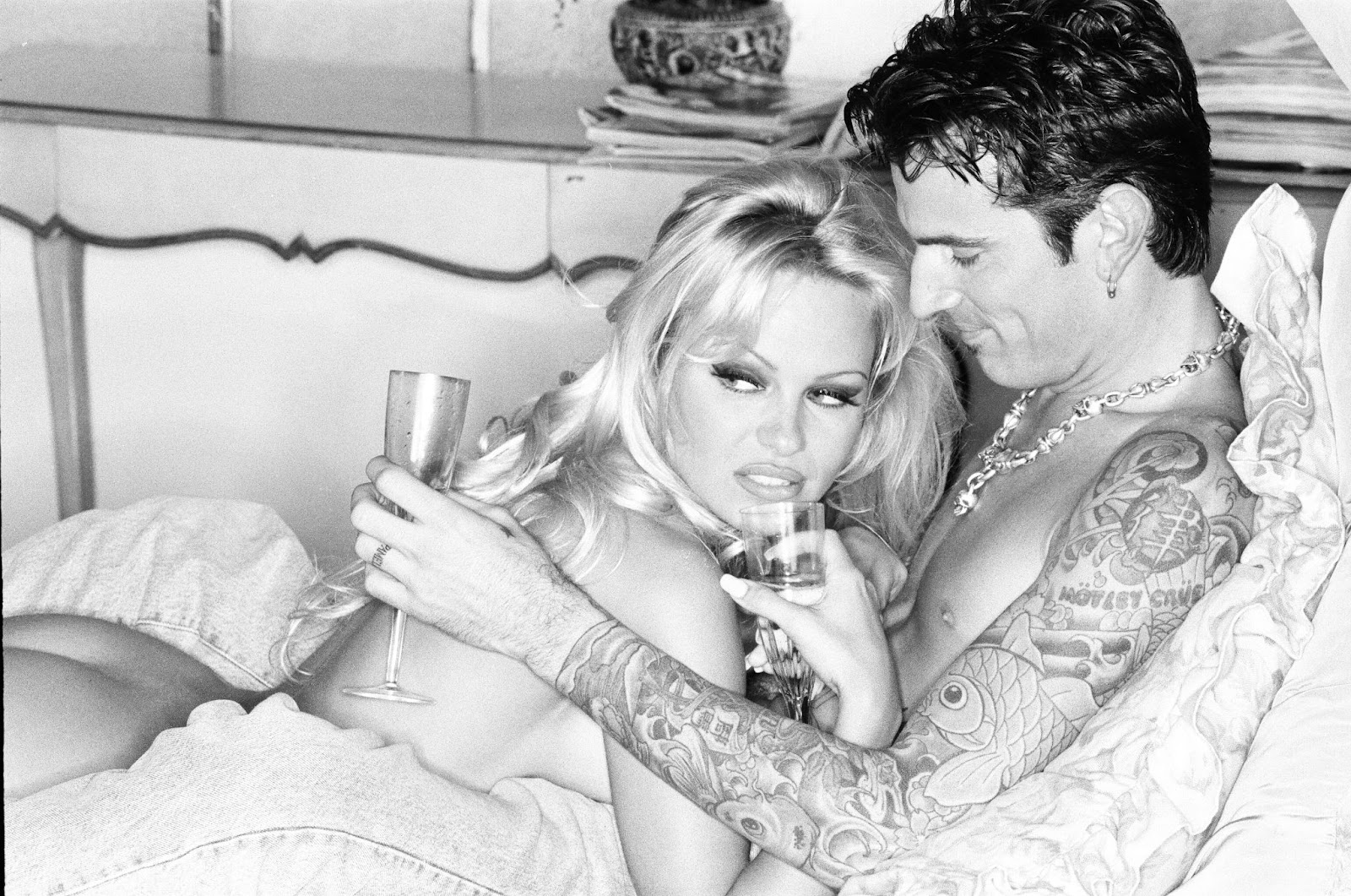 For updates on all of our upcoming drops, subscribe to our newsletter below.